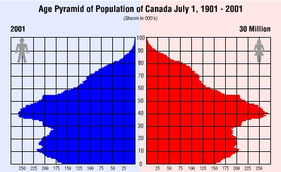 Figure 18 - Population Pyramid
One facet of descriptive epidemiology focuses on the person - It asks, who is getting the disease (Merrill, 2013)? Poluations are charatertized often by demographics and personal characteristics that can provide important clues as to the causes of the disease or at the very least offer insight into the determinants or establish a casual relationship to a disease. The personal characteristics may include; age, gender race/ethnicity, marital/family status, occupation and education(Merrill, 2013) . For example:

Race
- Racial cataegorization is standard practice in defining the person aspect of descriptive epidemiology, as there are associated unique risks and behaiours as well as disease outcomes associcitaed with these variables. These can include but are not limited to eating behaviours, substance misuese and access to health care resources (Merrill, 2013).

Family/Marital
- Family and marital status play an important role in descriptive epidemiology, and it has significant implications upon the physical and mental health of not only the adults in a family, but for example in the case of a broken family, the children as well (Merrill, 2013).

Occupation
- Occupation can indicate the health and well being of person, as those who are employed are more likely to have health insurance and access to health care providers (healthy worker effect) resulting in lower mortality rates ( Merrill, 2013)

Population pyramids
Population pyramids are an excellent way to gain an understanding of past current and future trends in populations. The shape of the pyramid can change due to many factors including; poor health systems, sanitation, water sypply, food supply, sewage control, and access to medical care. Additionally changes can be seen in birth cohorts due to war, droughts, famines, birth control measures, fertility levels, or rates of marriage ( Merrill, 2013).