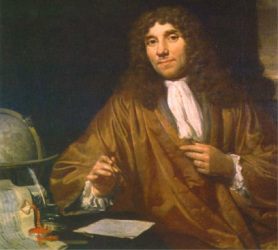 Figure 16 - Anton van Leeuwenhoek
Knowledge of the ability of glass being able to bend light have been known for over 2000 years, but the use of a lense in order for the purpose of magnification, is not reported until shortly after the death of Christ by the romans (History of Microscope, 2010). And it wasn't until the 1600's when the light microscope was borne ,and found its use in science and medicine through the work of Cornelious Drebble and colleges (Merrill, 2013). But at that point the true ability of the microscope had yet to be realized as its magnification power was limited to that of only 10x (History of Microscope, 2010).
It is believed that the first microscope was developed by a Dutch spectacle maker in 1590 (The History Microscope), but It was not until  Antoni Van Leeuwenhoek, who had taught himself how to grind lenses and with time perfected it's use, did it's magnification become significantly useful (270x) (The History of Microscope, 2010). He owned over 247 microscopes and over 400 lenses, many of which he had ground himself (Merrill, 2013),
In addition of epidemiology and microbiology, chemistry and histology were also developed due to the advent of the microscope which greatly advanced in the understanding of disease, giving a far more detailed view of life then ever before. Without the use of the microscope, the findings of some major contributors to the study of epidemiology would never have been possible (Merrill, 2013)