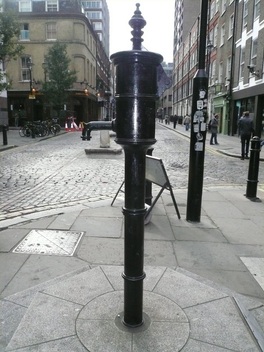 Figure 13 - The Broad Street Pump
(1813-1858)
John Snow is famous for 2 cholera studies conducted in the mid 1800's , and is considered one of greatest contributors to the science of epidemiology (Merill, 2013). Many of Snow's practices and approaches, laid the groundwork for descriptive and analytical epidemiology approaches still used today (Merrill, 2013). Snow's work focused on the great cholera epidemics of London, where he studied the disease and sources of possible water contamination including flow of water into underground aquifers, wells and water pumps (Merrill, 2013). By gathering and plotting descriptive epidemiological data, Snow was able to identify that almost all of the cholera related deaths were within a short distance of one water supply – The Broad Street Pump (seen left) (Merrill, 2013). City officials officials removed the handle from the pump, which resulted in arguably the most famous public health intervention, due to epidemiological science. The inactive pump still remains in the Soho District of London today, as a symbol of the bridging between epidemiology and medicine (Merrill, 2013).
In a subsequent outbreak, Snow went to every house with a recent death due to Cholera and was able to distinctly identify two differing water sources from seperate water supply companies, one of which had recently moved....upstream from the city's sewage outlet (Merrill, 2013). Using statistical analysis and comparing mortality rates between the two area, one supplied with water from the water supply company above, and the other below the city's sewage outlet (Merrill, 2013). He found compelling evidence that the source of the cholera disease was the water supply positioned below the sewage outlet, and that cholera was therefore waterborne disease that traveled in both surface and groundwater supplies (Merrill, 2013). Because of his use of multiple types of epidemiological practices, and having such an impact on public health, John Snow is considered by many to be the "father of epidemiology".