"...observed it was not the labor that was the problem, but the examination of the patients" 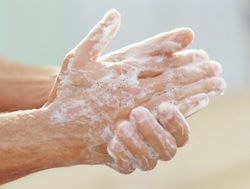 Figure 12 - Washing hands
1818 - 1865
If you were a pregnant woman living in the 1800's, one of your biggest fears was dying of childbed fever (Merrill, 2013). The disease, acquired shortly after childbirth was usually very quick and fatal. An otherwise health woman would succumb to the fever, even after an uneventful delivery due to a uterine infection from a streptococcal bacteria, and many times the child would become infected and die as well (Merrill, 2013). Semmelweis, while working at the Viennese Maturnity Hospital (clinical director) sought to find out  why , and conducted a series of investigations through observation and surveillance (Merrill, 2013). He noted in his observations, that only in one of the two maternity clinics did women become ill. And that illness occurred typically within 24-36 hours after delivery. In addition, he watched as whole rows of patients became infected, while adjacent rows did not. Semmelweis, then through a clinical observational, retrospective study, collecting and analyzing the descriptive data, obtained through controlled experimentation, suggested that the cause of the deadly fever was due to pelvic examinations conducted by physicians and subsequently passed amongst the recovering women through patient to patient contact (Merrill, 2013). He discovered that in one of the clinics, the medical students conducting the pelvic exams came directly from the morgue after performing autopsies on decaying dead bodies. And at the time, hand washing of any form was not  common practice because was  accepted that disease developed spontaneously, and therefore the thought of it caused by anything else was not conceivable (Merrill ,2013). Semmelweis instituted a requirement at the hospital that every physician and midwife was to wash their hands before each examination, which resulted in a dramatic drop in infections and mortality rates (Merrill, 2013). His findings were at the time discounted by many of his colleagues, but today hand washing is one of the best sanitation practices for medical and lay people a like.