believed that those exposed to cowpox, did not get smallpox 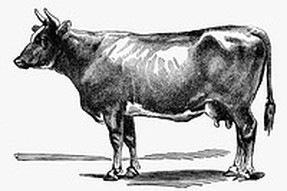 Figure 10 - Cow
1749 - 1823
Edward Lind was a rural physician that had been well aware and had personally observed that that the servants and milkmaids of farmers, did not acquire the small pox disease after first being infected with cowpox (Merrill, 2013). Stories such as that of Benjamin Jesty, a farmer in England who had exposed his  wife and children to cowpox, and  then whom never acquired the more deadly strain, were also known to Jenner (Merrill, 2013). Jenner had a theory that the servants who were required to tend to the heels of animals suffering from cowpox, would then later contaminate the nipples of cows during milking, which then would be transmitted to the milkmaids when they were milking the cows Merrill, 2013). He theorized that individuals acquiring the lesser (severity) of the two strains would subsequently build an immunity to the more deadly version. He tested his theory by infecting the open wound of a housemaid with smallpox, who had already acquired the cowpox disease earlier that year (Reidel, 2005). The result? as predicted the milkmaid did not succumb to the deadly smallpox virus. This led to Jenner's invention of the smallpox vaccine, which has since been used to officially eradicate smallpox from the planet, as the last case of small box was treated on october 26, 1977 (Merrill, 2013).